In RPSunday yesterday’s PICTURE OF THE WEEK -  CLOSE UP  photograph by Edward Whitaker " of LONG RUN and SAM WALEY-COHEN sweeping round the bend at the start of the final circuit, upsides stablemate RIVERSIDE THEATRE, with BARRY GARAGHTY on board (left in pic) and CUE CARD and JOE TIZZARD ( behind in pic) in the William Hill King George VI Chase at on Wednesday (Boxing Day) before LONG RUN
with SAM WALEY-COHEN aboard battles to a gritty victory over CAPTAIN CHRIS.
JMC Turfcall Comment: JOE TIZZARD has CUE CARD dangerously too close in behind LONG RUN,  as this close up photograph clearly shows.  JOE TIZZARD’S dirty, dangerous riding tactics aboard CUE CARD, a disgrace.  CUE CARD’S head jerked up in pain as he suffered a sharp jab in the mouth, on the bridle from the careless thoughtless dangerous riding of JOE TIZZARD who is right up behind LONG RUN. JO and CUE CARD jostling to unsettle LONG RUN showing LONG RUN’S  anxious expression fully aware of the danger going on behind him.  JOE TIZZARD’S dangerous positioning of  CUE CARD in line to clip heals with LONG RUN threatening lethal consequences to the lives of both LONG RUN and CUE CARD with still a circuit to go. Such riding totally unacceptable. A scenario following along in the wake of six decades of bloodhorse illiterate regulation, a sad sight to see a young man, Joe Tizzard ride like this, and to obviously believe that such riding is perfectly acceptable. Why should Joe think differently? The stewards took no action. Why did the stewards take no action?

The Aintree  2013 Grand National waiting in the wings, will not be any safer this year than it has been in any other year, due to riding as detailed above found to be acceptable by stewards who know no better.  And due to the length of time stewards bloodhorse illiteracy has been  allowed to continue on lowering handler rider standards. The Burnham Report  directed all trainers' to employ superstore shelf stackers to come in part time to ride out the owners' horses placed in training, to be paid the minimum wage. Direction as this the most dangerous bloodhorse illiteracy direction of all. Where did the money come from to pay for the Burnham Report? 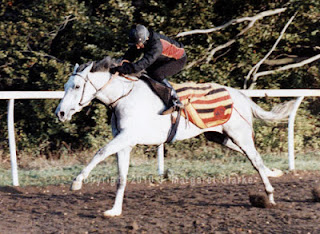 
Big Brother could strip DETTORI of his A-list sparkle

A MONDAY JURY SPECIAL
“Answers all the big questions from a fascinating Christmas period. See pages 12-13


Another brilliant photograph of SIMONSIG and BARRY GARAGHTY landing over a chase fence, asking the question “IS SIMONSIG THE FESTIVAL BANKER? This photograph is a winner for sure. Capturing in an instant, one moment in time, gorgeous sparkling SIMONSIG partner BARRY GARRAGHTY so finely in tune with each other,  showing us all what jump racing is all about, and should always aim to be about. Here’s hoping our own Queen Elizabeth, Sam’s Dad, Richard Waley Cohen,  Nicky Henderson, Paul Nicholls, Jonjo O’Neill, John Francome can turn the present poor out of tune British horseracing regulation departments as in licensing,  passports to include all racecourses, disciplinary, stewarding, the British Rules of Racing to be transcribed with all racehorses needs and rights the number one priority, to form the foundation for, and provision of a future true Equus Zone.

Jon Lees New C4 team face low-key beginning at Musselburgh.
“CHANNEL 4 yesterday delivered the news armchair racing fans wanted by committing to showcase its new-look coverage of the sport on the first day of 2013, even if ’s high-profile meeting falls victim to the wet weather.
“With more rain due today, that fixture is subject to a three pm inspection, but Channel 4 said that provided Musselburgh – where there were no weather problems reported yesterday – goes ahead there would be a two-hour broadcast that would introduce viewers to the new presenting team, headed by Clare Balding.
“Channel 4 has made contingency plans to show four races from Musselburgh in the event of being abandoned, and Balding would provide additional live content from Nicky Henderson’s stable in Lambourn in a 1pm-3pm program reduced from its advertised ywo-and-a-half-hour slot….

FOLDING BACK THE YEARS
Rodney Masters finds out what’s in store in 2013 for some of the veterans who raced this year.
“IT IS said that, for people, old age is when it takes you longer to get over a good time than to have it. But when is the defining mark for a racehorse?
A must read

DAVID ASHFORTH
SATURDAY MUSINGS FROM A RETIRED RACING ENTHUSIAST
David sets rather a conundrum in his Saturday Musings this week. (29.12.2012)
“Looking forward and planning, both are so important,
but remember nobody likes a know-all."
ALL THOSE ADVENTURING OUT ON THE WORLD'S HORSERACING ROAD TAKE HEED OF DAVID'S WORDS.

DAVID'S PHOTOGRAPH
“The exploits of Long Run and Sam Waley-Cohen on Wednesday are a thing of the past, unlike the feast day of Saint Trophimus of (above) (pic of a tiny monk)
Right or wrong? What do you think?
http://en.wikipedia.org/wiki/Trophimus_of_Arles
JMC Wrong. LONG RUN'S achievements will be recognised
in the History of the Turf for ever, and rightly so.

It does warn us in the bible that within religious faiths some vicars and priest at the end of time will be found to be imposters.

Guest Star Nicky (Equus Zone) on the Morning Line yesterday, completed the Guest Test in ace fashion, shooting to the very top of the leader board.  We don’t know yet if the new Ch4 horseracing team will be continuing on with C4 Guest Test or not, we haven’t got long to wait and see, only until next Saturday.
THE PEOPLE BEHIND THE LIFE AND TIMES OF  LONG RUN.
Surely no one can call licensed trainer Nicky Henderson “a know all” could they? Or could they? Nicky accurately defines all racehorses as “accidents waiting to happen”.  Surely one of the greatest quotes ever.
Yes, Yes, Yes.  In 4 words Nicky captures the essence of just how dangerous horseracing can become if directed in the wrong way, if  directed by  bloodhorse illiterate governments. Nicky gives his accurate warning -  “all racehorses are accidents waiting to happen”. In otherwords do not mess with racehorses lives if you don't know anything about the needs and rights of all such horses.

Another 2012 quote from Jamie Osborne (Equus Zone)  “Trainers need an hotel for their owners these days.” Yes, Yes, Yes so they do,  such hotels need to be run along Equus Zone principles. In the present order of things looks like trainers are to be burdened even further by governments demanding and forcefully expecting the impossible through their bloodhorse illiteracy.
But is the owner of LONG RUN Richard Waley-Cohen, bloodhorse literate or bloodhorse illiterate?

Akira
JAPAN
A Worldwide Racing Road to Explore
How are things done in Japan?

The Ratzinger Archives.
Collected Works of Joseph Cardinal Ratzinger (Pope Benedict XV1) April 1st 2005
“In a fascinating homily given on 1st April 2005 (the day before Pope John Paul died), Cardinal Ratzinger cited the Prologue of Saint John’s Gospel as the central plank in what we believe about the world and it’s purpose.

The World is a product of the Word, of the Logos, as expresses it, using a key term from the Greek language. ‘Logos’ means ‘reason’, ‘sense’, ‘word’. It is not reason pure and simple, but creative Reason, that speaks and communicates itself. It is Reason that both is and creates sense.”
“All that we know about the Trinitarian nature of God is folded into this extraordinary passage from Scripture. The fact that creation is imbued from the beginning with the presence of the Son, the Word who would become incarnate, and that he communicated himself in History through the Holy Spirit. That our role in the Creation, made in his image, is to cooperate with the creative reason which is at the core of our existence. That we make sense of the world and our place in it, acting creatively in that world, secure in the knowledge that everything is full of meaning, or Logos. As the Holy Father has said on another occasion: “Christianity must always remember that it is the religion of the Logos. It is faith in the Creator Spiritus, (Creator Spirit), from which proceeds everything that exists.”

“Everything has meaning, and so nothing can be lost. Indeed from his fullness we have, all of us, received – yes, grace in return for grace.” (Jn 1:16)
A racehorse in training gives grace in return for grace, or not as the case maybe, grace if shown to him by a truly creative bloodhorse literate handler rider. No spark otherwise
http://popebenedictxvi.blogspot.co.uk/2008/08/presentations-addresses-by-cardinal.html

http://www.youtube.com/watch?v=GXm0lnNSJJ8
True Bloodhorse Literacy brings everyone flowers every day to include the horses.


Please us this Join-Up for Turfall  - Morning Line info
http://turfcallmorningline.blogspot.co.uk/2012/12/ch4-saturday-december-29th-morning-line.html

TODAY IN THE RACING POST
PRICEWISE (Tom Segal) tracks down the best bets from the top TV races at
Newbury, Leopardstown and


GOING: HEAVY (Soft in places on Chase course; GoingStick: Hurdle 4.6 Chase 5.3) (Rails have been moved in to give fresh lines; all hurdle flights have fresh ground on the inside). (Rain and wind)

Show all racecards for this meeting on one page About Scoop6 Betting
Posted by Turfcall at 20:15 No comments: